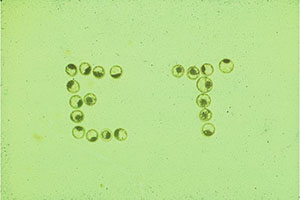 We have all experienced frozen straws containing embryos or semen exploding when exposed to the environment or water in the thermos. Unfortunately, the person thawing is accused of making a mistake, but the fault is due to the technician who froze the embryos not sealing the straw prior to cooling and deep freeze. When even a spicule of a hole is present liquid nitrogen enters the straw due to contraction of the air in the straw therefore It is essential that both ends of the straw are sealed. In one end of the straw cotton plugs hold PVC powder in place, and the powder forms the seal when moistened with media. On occasions the cotton at the end of the straw is not moistened by media in the straw when an air space is between the media and the cotton. The freezing process causes contraction of the air space in the straw which draws the liquid nitrogen into the straw. But on thawing and meeting a warm environment the liquid nitrogen rapidly expands causing an explosion.

Other causes of careless sealing are, heat sealing at the wrong temperature. If the heat sealer is too hot the plastic in the straw melts or if the heat sealer is too cool the plastic is not fused together, in both cases nitrogen enters the straw during cooling. I recently received a report of failing plugs causing leakage, either they were poor quality or placed incorrectly in the end of the straw. Sealing waxes were briefly popular but proved unreliable, in fact the wax would ooze out of the straw in a hot room before freezing.

Allowing a liquid nitrogen tank to run out of nitrogen naturally will lead to destruction of embryos and semen. In one case I was involved in, the manager of the ranch secretly refilled the empty tank then used the semen on 15 donor cows. After flushing 5 cows all we observed were eggs, no embryos. I examined 4 straws containing dead semen, but the fourth straw solved the problem. The straw was splintered longitudinally, which I had previously observed in a refilled tank. So if you find several straws containing dead semen or embryos keep thawing until the fractured straws are observed.

I have found PVC powder the most reliable sealant and by far the lowest cost. Straws containing embryos for freezing should be loaded with at least two air spaces between the media columns. Ensuring the first column of media drawn into the straw touches the cotton plug. Air thawing will not solve the problem. Exploding straw problems can only be avoided by careful attention to details.