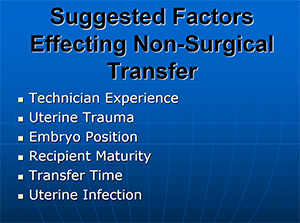 The average age of a cattle livestock owner is 58, so where are the future beef producers? The world population is supposed to double by 2050 so food production must significantly increase. One attraction for young people has to be applied technology. In our case starting with artificial insemination, estrous synchronization, and embryo transfer. Previous producers have only seen about 4 generations of cattle so improvements are relatively slow, particularly in the minds of the young producers. So we believe our embryo transfer school is delivering a valuable service to the cattle industry by introducing students (from 16 to 80 years old) to this technology and opening up an interesting, challenging , lifelong changing new world. New innovations of recognized technologies are frequently being tried, most fail but some are successful, one of these recent discoveries is the improvement of recipient pregnancies.

There have been many attempts to improve transferred embryo pregnancy rate for instance administering progesterone by injection, via vaginal mucosa absorption after deposition of the embryo or by a prostaglandin antagonist such as phenylbutazone, also additives to the media containing the embryos have been tried but none have stood the test of time. In fact there have been so many claims of success if they were all applied at the same time then the pregnancy rate would be 150%!

However, recently in published literature it appears there is a possibility of increasing pregnancy rate in recipients. We frequently have to transfer embryos into far from perfect recipients; we are forced to use what is available. There have been two published reports where either HCG was injected or a CIDR was applied to a poor quality recipient 2 to 3 days after ESTRUS (not after transfer as previously practiced) and the resulting corpora lutea were enlarged with a consequent increased production of progesterone. On Day 15 the embryos were significantly larger in those recipients receiving either HCG or CIDRs compared to the controls. Thus inserting a CIDR 3 days after standing estrus, transferring the embryo any of days, 6,7 or 8 according to the synchrony and removing the CIDR immediately after transfer appears to be well worth trying especially in less than perfect recipients. To date we have no published data on pregnancy rate following this protocol.

Recent studies have shown increased pregnancy rates after AI in heifers receiving bovine somatotropin (BST). In this study 490 heifers received 325mg BST at the time of AI, repeated 14 days later. Pregnancy rates in this test group were 43% compared to 35.6% in the 500 controls. Live calf born to the test group was 34% compared to 26.6% for the controls. These results are from AI but it looks promising for embryo transfer and well worth a try considering the cost of an embryo.

A question we are frequently asked refers to non-return of medium when "flushing " donors in both experienced and inexperienced technicians. This problem occurs more frequently when performing so-called body flushes compared to horn flushes. There are several reasons for this problem to happen, the most common is a mucus blockage. The flow of medium suddenly stops. When this occurs it is most likely mucus in the holes of the catheter. Often the problem can be solved by adding a few more ccs, of medium and repeating the procedure until the mucus is removed. If this fails allow the catheter to become blocked, remove it and try a new catheter. On some occasions just pushing the balloon forward will clear the mucus. A second problem can be the balloon is still in the cervix. In this case medium will flow into the uterus but not out. Palpate, locate the balloon and re-locate. A third reason for non-return of medium is the chance there is no air outlet in the filter. Three years ago a very frustrated veterinarian called for help. After preparing 3 donors he could not get any medium to return. After some discussion he reported using the Emcon filter which has no air outlet. This was an old design and we made a whole in the lid with a 16 or 18 gauge needle. A fourth problem can be a hole in the wall of the uterus.

There are several reasons for this problem:
There is also a pathological condition called a muco-metra where the uterus is filled with mucus. This condition is easy to diagnose as the filter screen immediately blocks and when a second filter is applied it immediately blocks. In these cases there will be no embryos, so remove the filter and irrigate the uterus with at least a liter of medium. Followed by an old treatment, 500cc of Lugol's iodine.