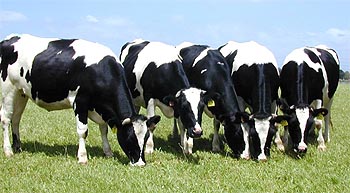 We received several calls this summer regarding below average embryo collections and unsatisfactory pregnancy results in recipients. These concerns led to the creation of this month's newsletter which addresses heat stress and its effects on bovine reproduction.

Global warming is a term we are all familiar with and as the name denotes temperatures are higher than usual, especially this summer, where record high temperatures have been experienced. But these temperatures were preceded with record cold temperatures. A more accurate term would be climate change.

So how do these changes affect the cattle breeder? There are several consequences due to inclement weather patterns resulting in multiple heat stresses. Signs are: increased respiration rate from around a normal 40 breaths per minute to 80 indicating stress, to even 120 per minute when the animal is in serious stress. Cattle cannot dissipate heat as we do, plus their lung capacity in comparison to their body size is relatively small thus leading to early, often unexpected stressful conditions and even death.

The reproductive system is very sensitive to heat stress, especially sudden significant changes in temperature leading to poor oocyte (egg) maturation resulting in lower estrogen production manifested in a lack of signs of heat. In fact, it has been reported up to 80% of dairy cattle heats remain undetected even though they occurred. In addition uterine blood flow is decreased leading to high temperatures in the uterus and a loss of pregnancies. Most losses of pregnancies occur from Day 7 to 14 of the estrus cycle.

So how can we circumvent some of these stresses? The obvious methods of cooling cows is shade, water, minerals, fly control and careful management. For dairy cattle, fans and mists are used which have been shown to lower respiration rate, heart rate, and temperature, but these methods are not usually available for beef cattle. Hormonal protocols have proven successful and practical; This is especially significant when there is little control of the environment.

Estrus synchronization treatments using products such as CIDRs are commonly used for AI and embryo transfer programs and can be modified for the stress conditions e.g. Day 0 (any day of the cycle except during heat ) inject 2cc Of GnRh (cystorelin), Day 7 inject 5cc lutalyse or 2cc estrumate, remove the CIDRs and heat usual occurs 2 days later, breed approximately 12 hours later and inject 2cc GnRh. If there are problems with heat detection the above protocol can be modified as follows—Day 0 GnRh, Day 7 lutalyse, Day 8 GnRh and breed 16 to 22 hours later regardless of observing a standing heat. This treatment in one report increased pregnancy rates from 29% to 47%. On Day 8 we used to administer an estrogen product but that is now illegal in the US. The addition of a progesterone such as a CIDR after breeding has been tried but in most reports this procedure has not been successful (see previous newsletter for details).

In conclusion climate change is causing problems in cattle reproduction in general, but is increasingly observed when we place extra stress on dairy cattle (metabolic heat), and in beef cattle (embryo transfer programs). These problems are not going away with time so we are forced to improve or change some of our management systems. One should follow the old axiom, if it works don't change it, but if it no longer works try something new!