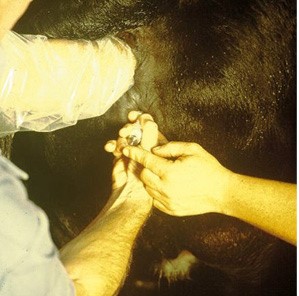 I have often speculated after carefully transferring a #1 embryo into a recipient with a known corpus luteum (CL), on the correct date of the estrous cycle, following regular cycles, why do we not achieve pregnancy rates around 90 to 100 per cent? As we all know that rarely occurs at least when significant numbers of embryos are transferred. But of course when one stops to think about the number of variants in the process then sanity returns. So what are these other factors affecting our results?

First is the quality of the recipient herself. Too often when this industry started or when one scores a new client, recipients are selected from cows that failed in the regular breeding program, or are in poor condition (too fat, too thin). Possibly the belief is that we are not using these genetics since the embryo is supplying a new set of desirable genes. But unsatisfactory recipients often result in increased dystocia (difficult calving), produce poor quality colostrum, low milk production and poor mothering ability.

A lack of synchronization techniques has also occurred when the donor group is miles away from another group preparing the recipients. The latter group claim they know how to prepare and synchronize the recipients but they really do not. Several years ago I had an international experience where the recipients were prepared and synchronized in another country by two veterinarians but no records were kept of first observed standing heat. It was in the days before ultra-sound, so I had to rely on palpation only, hoping those with CLs were in heat at the predicted times.

There have has been a mountain of literature written about heat detection yet despite the illustrated records of financial losses due to inadequate heat detection it still occasionally occurs. Optimum observation times are at dawn and dusk, but 60% of first standing heats will be at night, so heat aids of some type are necessary. Tail head heat patches are the most common aid, however some have become too expensive, and often they no longer work after a freeze. I use spray paint (made for marking), to put a thin line on the tail head. The best color is an incandescent orange.

Obviously the skill of the technician in placing the embryo carefully in the correct horn of the uterus is paramount. In my trouble shooting experiences where technicians are experiencing problems I have found the two most common problems are, placing the embryo in the wrong horn, and incorrect identification of a CL. In some cases, an unusually large corpus albicans (CA) has been mistaken for a CL. Occasionally I have observed unsatisfactory pregnancy rates due to the technician attempting to place the embryo as high as possible in the horn, and staying in that sensitive horn too long causing damage to the lining of the uterus, resulting in hemorrhage in the area where the embryo has been deposited.

Finally, sudden changes in the temperature such as a 30 degree drop within a few hours will delay standing heat and the subsequent collection and transport of eggs from the ovary to the fallopian tubes. In these cases, there is a good ovarian response with enlarged ovaries and for instance, 6 to 8 CLs on each ovary but no eggs or embryos are collected. I have noticed this problem occurs more frequently in heifers under any conditions.

In conclusion when one considers all of the physiological steps in producing a pregnancy (I have only listed a few) it is little short of a miracle that we all made it!