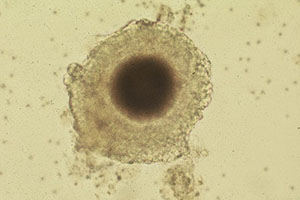 Recently an experienced embryo transfer practitioner collected some eggs and embryos from a superovulated donor cow. On examination of the eggs and embryos he observed they were still covered in cumulus cells which is very unusual since they came from the uterus. Cumulus cells feed the oocytes (eggs) while they are in the ovaries and follicles but disappear by the time they enter the uterus via the oviducts. Stay with me, there is a useful sequence to this unusual occurrence, which one day may be of benefit to owners using embryo transfer to improve their livestock.

I first observed cumulus cells on embryos many years ago. We flushed a Holstein heifer exhibiting an excellent response to the superovulation treatment, but only 3 number 1 embryos were recovered when we were expecting around 10. Immediately after the flush I had to rush over to the vet school to give a lecture to the students on reproductive diseases. During this time the unexpected poor result of the flush was on my mind so I decided to repeat the flush. This time we retrieved 5 number 1 embryos still covered in cumulus cells which strongly suggested the embryos had recently moved from the oviducts to the uterus where they became accessible to standard flushing techniques. We speculated at that time that possibly due to palpation of the reproductive tract plus the injection of a prostaglandin stimulated the oviducts into delivering the embryos into the uterus on day 7 when normally they enter the uterus around day 4 of the estrous cycle.

To back up this speculation I subsequently had the opportunity to examine this unusual occurrence. When teaching embryo transfer techniques to veterinarians at the American Bovine Practitioners meeting, the donors were flushed in the morning, then they were slaughtered and the reproductive tracts were returned for the veterinarians to examine. I dissected out the oviducts and infused them with media to wash out the contents. Over time 56 oviducts were flushed and 8 embryos (morulae and blastocysts) were recovered a 14% rate which could be higher as these oviducts were not selected for low recovery of eggs and embryos from the uterii they were originally attached to, compared to the previously described circumstances in the Holstein heifer.

Unfortunately, I have never recovered embryos from a second flush when nothing was recovered from the first flush. So the take home tip is, when fewer than estimated transferrable quality embryos are recovered it is judicious to repeat the flush.