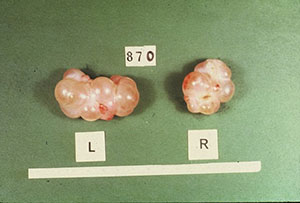 There have been many attempts to improve pregnancy rates by administering progesterone (PG) from injections to vaginal suppositories. Unfortunately, results have been well below expectations but have improved with the advent of controlled intravaginal releasing devices (CIDRs) for synchronizing estrus improving CLs (corpora lutea) resulting in larger follicles producing higher quality eggs.

CIDRs contain 1.9g of P4. They release 610mg of P4 averaging 87mg/day into the blood stream of the cow. High producing dairy cows metabolize high rates of P4 due to the large blood liver flow. Therefor one CIDR increases P4 by only 0.78ng/ml in a lactating cow after 7 days of application, compared to 4 to 5.8ng/ml in an untreated cow. From these findings one CIDR is insufficient to improve P4 levels needed to sustain a CL resulting in larger follicles and improved quality of eggs.

Recent studies with lactating cows (under stress due to milk production) have reported increased pregnancy rates when two CIDRs are inserted. It would seem reasonable to assume the same results are achieved in beef cattle under stress for example sudden large changes in temperature over a few hours, insufficient energy in a ration, too fat for optimum breeding and possibly too frequent synchronization and superovulation efforts. Therefore, it was hypothesized that two CIDRs in a difficult situation could improve pregnancy rates by obtaining better quality eggs.

In a recent study 1160 Holsteins of which 326 (29%) had no CL thus significantly reducing rates of circulating P4. Cows were divided into two randomized groups, one group received one CIDR and the second group received two CIDRs vaginally inserted. After removal of the CIDRs followed by heat, 7 days later cows were implanted with 7 day embryos. The cows recording low P4 and missing a CL (due to stress) at the start of the synchronizing and superovulation treatment and given two CIDRs resulted in higher pregnancy rates at Day 60 (27.6%) compared to the one CIDR cows. Previous studies have shown that increased P4 during follicular development can alter early embryo development and quality.

In conclusion it maybe judicious to attempt the two CIDR protocol for estrous synchronization when cows have been stressed or routinely produce poor quality embryos.