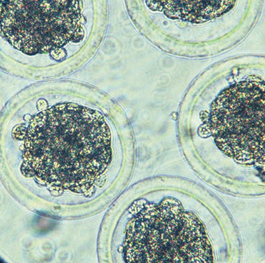 Recently a cattle owner contacted me regarding frozen embryo classification. He had some frozen embryos stored, classified as Stage 4 which are embryos developed to the compact morula stage usually observed 6 days after first observed standing heat (estrus) . He had been informed by several contacts that he should discard these Stage 4 embryos, which would have been a significant number as they had been stored over the years, but fortunately he did not discard them. This alarming misinformation had come from several informants and subsequently stimulated the following article:

The International Embryo Transfer Society in the early 1980s promoted and encouraged embryo transfer practitioners to grade embryos with guidelines into 4 groups. The number 1's would be called excellent, the number 2's called good, the number 3's would be fair and the number 4's are dead or degenerated.

In most cases when an embryo has attained the blastocyst stage it is a number 1, so I often advise my students to flush their donors on Day 7.5 when most of the embryos will be blastocysts and easy to recognize.

Classification of embryos is far from an exact science. For example one practitioner will diagnose an embryo as a 1 while a second practitioner will call it a 2. Recently in a published paper there were no differences in pregnancy rates between embryos designated as 1's or 2's by two different practitioners. A number of years ago we were discussing how to grade embryos following freezing and thawing. Embryos prior to thawing classified as a 1 often show some damage so I grade them as a 2 or even a 3. However, some claim that freezing damage should be ignored leaving the original grade. This opinion obviously defeats the purpose of grading, which is an attempt to predict the coming pregnancy chances which will be lower due to freezing damage.

Remember the next time you transfer some embryos, pregnancy rates depend on the quality of the embryos before freezing, the ability of the person freezing the embryos, the storage practices, the quality and preparation of the recipients, and the skill of the person performing the transfers. So if you experience unacceptable pregnancy rates don't forget it may not be the fault of the practitioner transferring the embryos who usually receives the blame.

Be careful where you obtain your advice on embryo transfer I have observed several incorrect pieces of advice over the internet.

May all your embryos be number 1's, and your transfer techniques excellent.